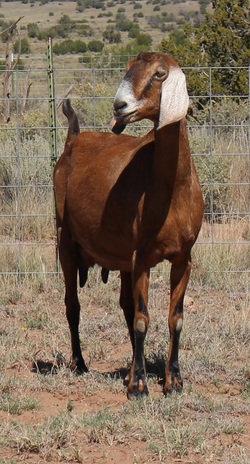 Athena - October 2015
2019: Athena is liking retirement more and more, she is no longer Herd Queen, but is still very high ranking. She leaves the petty bickering to younger animals and though she is starting to need supplemental feed to keep her weight, she is still very healthy for her age. Athena is as sweet as ever, and still one of the first goats in the herd to appear under hand to be pet or brushed.

2018: Of all of our does, Athena has aged the most gracefully. She has maintained her stature, position, and her perfect temperament. For the first time in her life, we are not struggling to keep weight on her. In fact, Athena looks wonderful for an old lady and we are hoping that she will be with us for years to come.

2017: Athena is now permanently retired and though she is now Queen of the herd, this has not gone to her head. Athena is still the first goat to show up to be brushed and often the last to leave people petting goats, even for food.

2016: Athena has been retired from kidding after this year, but she went out with a bang. Not only where her kids from this year fabulously healthy, but this was the first kidding without problems and Athena came out looking great. Her milk continues to be impressive, her demeanor couldn't be sweeter and after drying her off she is officially retired and will live out her life with us.

2015:  Athena is really a giant doe - she appraised two years ago as being in the top 10 percentage in height, and after a year off from milking, she has really 'filled in' (Fluffy, not fat, right?).  We are hoping for triplets this year, and a good milking year - Athena is usually our heavy-duty volume milker and with her 'off' last year, we had no use for the extra refrigerator! This year's Linear Appraisal was Athena's permanent score and she got a 91!

2014:  No internet access except to do schoolwork!  Athena had a tough year in 2014, though.   She concieved a single huge buckling (Hermes) and did not have an easy kidding.  Athena seemed to freshen with mastitis and once she was treated a few times and tested clean, she was dried off.

2013: Athena has really grown into herself, she is becoming a beautiful young lady. She is as gentle and sweet as ever. Easy to handle and Athena will continue to stand as my 4-H Showmanship goat. Her kids are just as pretty as she is, the only main flaw is how hard it is to keep weight on her. She pumps out milk but her body weight drops. Still trying to keep this good girl healthy. Over all, a great goat!
2012:  Sweet but rather. . . Babyish. Athena was two year old first freshener (she aborted as a yearling)  when I got her. She had a good udder for one so young and was giving about a gallon a day once I got her going! Although she was very slow to develop, she is doing great!   She is a friendly and willing girl and we got first in 4H Showmanship at the Navajo County fair this year! with my 4-H!

Fun Fact: Athena was originally staying with Sarina as a 'buddy' until we could get our other goats to our house. We agreed one more goat wouldn't hurt and I ended up buying Athena too! 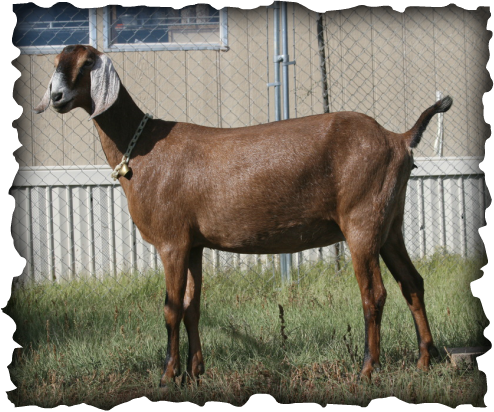