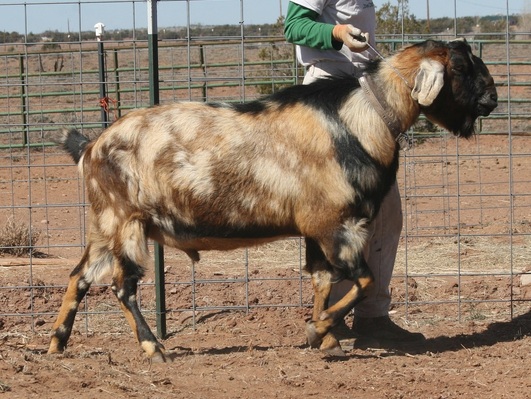 Nebula has been a proud herd sire of Witch Hazel Dairy kids since we got him in 2010.

Note: His right ear was frostbitten in winter of 2014.  Evidently Nebula and Ninja were butting heads and an ear got caught between.  The ear tip became swollen and the blood flow compromised.  When the temperature dropped, the bottom part of the ear froze and eventually fell off.  Nebula's left ear, pictured below, shows his 'actual' ear length.

Fun Fact about Nebula: Nebula has a sister (Black Mesa Spring Thyme) who is a DHIR Elite Doe with her Superior Genetics title!

Another Fun Fact: Nebula is in the Young Sire Development Program!*(below is the letter I got telling me this)

Congratulations! We are pleased to inform you that the buck above has qualified during the 2011 2nd quarter for the ADGA Sire Development Program (ADGA-SDP). According to performance records, he has a calculated Estimated Transmitting Ability (ETA) of 79 for Production over Type (2:1) and -36for Type over Production (1:2).

The ADGA Sire Development Program is designed for the benefit of breeders and we would like your participation. By encouraging the "proving" of this buck while he is still young, the breed will benefit from the resulting performance data generated by his progeny. This will increase the reliability of his genetic evaluation and in addition, allow for the calculation of his sons and daughters ETA's. You can do this by using the guidelines below.

1. Use your buck through both artificial insemination and natural service, to generate a proof.

Place as many of his daughters in herds that participate in DHIR Production Testing and ADGA Linear Appraisal as possible. More daughters in different herds will help reduce the effect of management and environmental influences on your buck's PTI's.

2.  To enable Production and Type data to be gathered early in his life, freshen as many of his yearling daughters as possible. The minimum requirement to create a PTI score for your buck is; five daughters on DHIR test and one that is Linear Appraised. Higher reliability is achieved if those daughters are in multiple herds. This is sufficient to get an initial indication of a buck's genetic ability.

3.  Realizing that the only input for ETA calculations comes through the DHIR Production Testing program and the ADGA Linear Appraisal program, encourage herds containing his daughters to participate in both performance programs. This will generate the needed data to both "prove" him and supply data with which to evaluate the next generation.

As data is gathered, an animal's ETA values may change.  Bucks are evaluated for type and production from data provided to us by the USDA.  The current calculated ETA values are from the 7/11 yield and11/10 type evaluations which for your buck appear on his extended pedigree just below his name.

With the above methods, and through the USDA Sire Summaries, your buck's true production and type transmitting abilities can be known by the time he is three years-old. If, in fact, he turns out to be as good as or better than his current ETA indicates, he will still be young enough to have quality semen collected and/or be used naturally on many does. We hope that you will take an active part in helping your herdsire reach his genetic potential.