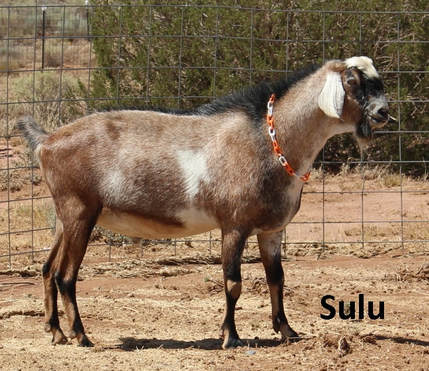 2018: We were battling a skin condition in Sulu this year, but throughout, his sweet temperament and gentle disposition has meant that even while he was not looking the best or particularly comfortable, this is never an animal that has made any move to hurt anyone. Sulu would likely like more dates than he is getting, but has maintained his position at the head of the buck pen!

2017: Sulu has really grown into himself and though we are limited in his use due to his relation to our does, his Linear Apprasial this year has been his best yet with a 90 VEE!!! We are very proud of our boy, but hope to lend him out or move him to a herd that could put his fabulous genetics to work!

2016: Sulu is one of the easiest bucks to handle that we have ever had. He has risen in rank and while we only bred him to one doe during the 2016-17 year, we love the look of him and hope to one day get him to another show. He is a gentle, polite buck, never too pushy with a doe or person. Over all, we are very happy to have kept him as a Herd Sire

2015:  Sulu continues to lengthen and grow into himself.  He is an active and busy fellow who still wants a lot of people-petting (especially when he is stinky) and he has his mom's stubborn willpower; he is starting to challenge the older bucks for their places in the pecking order. 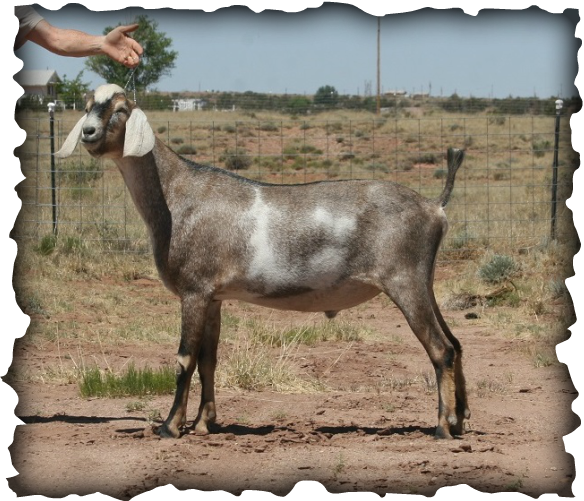 2014:  Congrats to Sulu for earning the first leg of his permanent championship at the 2014 Memorial Day Casa Grande ADGA show!

2013:  Sulu is very sweet and loves to be played with. He loves being pet and is easy to handle.
﻿
His ADGA Pedigree