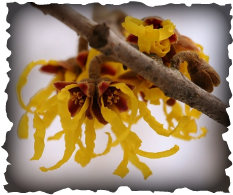 It was pointed out to me after I had gotten the name Witch Hazel that I might have religious problems. My name is Hazel and I wanted that to be in the herd name. I had originally wanted Hazelwood but ADGA said that was taken so I tried Hazelglen. I got it but decided I didn't like it. Next I tried Witch Hazel and Which Hazel. Witch Hazel stuck.
I am not Wiccian but I don't I don't mean to offend anyone who is. I learned that there is actually a Witch Hazel Tree, also called the Snapping Hazel. They have pretty but a little funny looking flowers and are more of a shrub than a tree. Look closely around this website and you will find lost of pictures of this cool looking plant. I also have pictures of the Hazel Tree around here.


This picture is from:  www.itsnature.org/plant_life/vegetation-plants/witch-hazel/

Call us at (520)349-0405
Hours: anytime after 2 on weekdays and anytime on weekends​
Email at witchhazeldairy@gmail.com